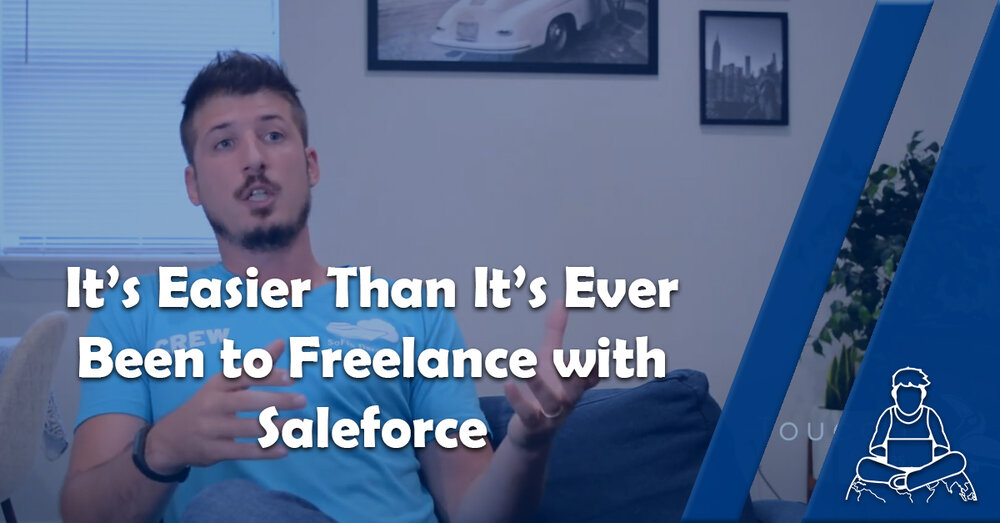 Several years ago, being a freelancer or a solo consultant was a daunting task. You had to be a jack of all trades, or incur the extra expense and headaches that required you to find a Salesforce Developer to partner up with. At least in my case, where I’ve never written a line of code in my life (that made its way to a client’s production org).

And that’s a good thing.

But now things have changed, dramatically. And Salesforce themselves have been it much easier today to become a freelancer or solo consultant. Check out below:

So let’s start with a story. The main challenge with wanting to become was the dependence on needing to know how to code. The reality of it was that the vast majority of my projects, even the ones for smaller companies, relied on Apex and Visualforce to some extent. Even if minor requests, being able to accomplish them would usually include some sort of code in the solution in able to deliver it. It was genuinely tough to avoid it at times.

And if you’re not a developer, it’s tough to do it on your own. So you had to resort to finding others that can help you out. And that incurs headaches of posting around, interviewing, controlling hours, paying them (and you usually foot the bill if they go over the hours), etc… Basically, one had to incur a lot of extra headaches to present themselves as Salesforce freelancers capable of delivering solutions without a good developer behind them.

And I’ve worked with several throughout my consulting years, I can attest that it can be an extra weight of responsibilities that take you from doing the work you genuinely intend to do as a freelancer. As a part-time freelancer, it would probably be impossible (or just not worth it) to manage projects that touch code.

Salesforce always received clear feedback on the reliance their customers had on developers for their orgs. I can usually know how much code-dependent an org is simply by asking “What year was it implemented?” and “How many users in the org?”. The older (and more users) the org, the almost certain knowledge that you’d find a LOT of old code, and maybe even a few S-controls (newer folks may need to Google that one).

The market also spoke loud and clear: the demand for Salesforce Developer salaries skyrocketed. I employed developers in the U.S. that left us within a year or two with offers for $30-40k more. And to try to be competitive as a consulting firm (when I was running one), I always used the rule of thumb to go “Average Salary for Role/Experience + 10%” to (hopelessly) try to stay competitive. The demand was so high that there weren’t enough developers to go around, and in 2021 that still seems to be the case.

But Salesforce acted quickly, and in several years across 2014, 2015, 2016 and finally 2017… Salesforce started rolling out powerful features that make a significant balance of power in what Administrators (and those who cannot code) can do. Today, with the flexibility of the tools at the hands of declarative programmers, a lot more projects can be managed without needing code. And it’s real: more than half of the projects I’ve worked on in 2019-2020 have not required any development at all. I was able to carry out the entire project from start to finish without the need of a developer.

Therefore, with the tools that continue to roll out, it’s becoming easier and easier to become a freelancer today that can help service customers directly and without depending on others.

Which brings me back to the massive demand for developers: As larger companies and consulting firms continue to pay top $$$ for developers, many smaller organizations are left behind: unable to justify the astronomical salaries that the market is demanding for these Salesforce Developers. Those same companies, which have been forced to self-implement, or work with a consulting partner on an extremely tight budget (because they can’t afford +$200/hr rates) are there today, still looking to properly set up their Salesforce, and in many cases looking for someone with just enough experience to get them on the right path.

So just like administrators we’re left behind at first, so were these smaller companies. Today, it’s possible to introduce both sides and tackle the work that previously was not possible.