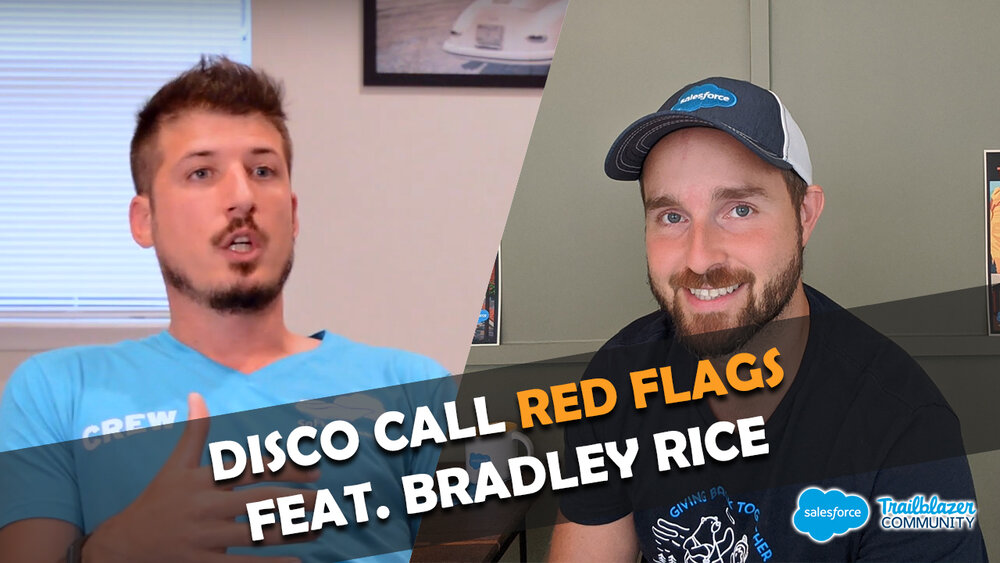 Red Flags to look out for on a Salesforce Discovery Call

In a previous video, we established how to conduct a Discovery Call and what to expect from it. Now it’s time to focus on another area of the call: what are some of the red flags that you should be listening for. The goal here is to improve your ability to gauge the seriousness of a customer to embark on a project and gauge whether this company you are talking to will be a good customer or not for you.

In the video below, we’ll discuss a few different key items that you may want to listen to. Even if you may not be in a position to say no to a project (because you have bills to pay), you can at least start to understand what the client will be like, and prepare yourself to have the best possible engagement with clear expectations.

If you’ve watched other videos in the channel, one of the key things to cover in a discovery call is budget. And there are three general categories that a prospect will land in:

While the second is not necessarily a bad thing, it is important to understand that they do at least have a budget. This will indicate a basic level of preparation for the project you are about to embark on. And considering a CRM implementation is a significant investment for most, making sure they have something already in mind helps you understand that they are mentally prepared and beyond just kicking tires.

A more organized client (from experience) will also have more realistic expectations, not only on budget but also other categories, such as timeline. Which brings us to our next point.

What is Their Timeline?

This is usually a great straight-forward point to address with anyone looking to implement Salesforce. The most important thing is to not let go of the bone when someone inevitably says “Oh I need it for yesterday”. The reality is that you want to establish some key things. First, if there’s a basic timeline, then it means you have another indicator that they have at least put some thought into it, always a positive sign.

More importantly, what you want to check here is to make sure if there’s a contract expiration date for another platform. Is Salesforce replacing an existing system? If so, when does that contract expire? That’s a key indication of a company that will need to move forward one way or another because once their contract is up, their status quo will no longer be a viable option and the new CRM must be implemented by then. Very big positive indicator if they do have something like that.

Another key indicator is to ask them about their due diligence. As Bradley Rice from Talent Stacker describes, being able to validate if they are considering other options for a CRM, or if they have done research into what features they need that Salesforce may offer, is another indicator that they are coming into this better prepared and that they may be serious about taking this project forward.

If they are able to articulate some of those features, and you know they are more complex than basic custom fields and reports, you also help validate that the need for a consultant who knows what he/she is doing is high. Extra bonus points even if the customer recognizes that on a call. It could be obvious that they do just for the fact that they are reaching out to you, but hearing them admit it helps you validate that they might have their expectations in the right place. And that’s not always the case.

The reality of it is that you may start creating more problems for yourself during a discovery call if you’re not careful. And from experience, sharing it with others and listening to them, the most common red flag is when one starts to solution design directly on the Discovery Call. While it may at times work, you may be unnecessarily placing yourself in very dangerous territory if you don’t fully understand the requirements, and budgets.

It can be tempting, you may want you build credibility with your expertise, but very commonly you may start overpromising on things right away that you may need to backtrack in the very near future because of a new requirement that was uncovered shortly after that makes your solution design not possible.

Most importantly, we go back to the main goal of a Discovery Call: to discover, which means, to listen. It’s been covered before that 80% of the talking during this call should be done by the prospect, so that way you can afterwards carefully put together a solution proposal that may address their needs.

While it can happen that you have a single clear red flag identified during a Discovery Call, the reality is that it is more likely that such red flag would never present itself unsolicited. And just as many body language experts say there is never one “true tell” that a person is lying, the same can be said for a prospects “tells” with how prepared they are with the project. Body Language experts argue that a lie is identified by a sequence of clues that all point you in the same direction, and a Discovery Call is exactly that (only with preparation clues instead). How organized a prospect is with their budget, their timelines, their expectations, and their due diligence are just some of the many pieces of information that you want to scratch the surface on to see if they all point in the same direction.

And if they are all pointing in the wrong direction: Beware. A lot.